The experience of living in poverty is caused by a lack of adequate money and financial resources to meet basic needs and daily living expenses. It is critical for those examining policy issues to recognize how persons dealing with poverty describe their own personal poverty experiences.

Over the course of the Poverty Listening Tour, individuals provided their own definitions of poverty. Each manifested a slightly different version of what they thought poverty entailed, and, in gripping detail, described how they attempted to deal with stark conditions and challenging situations.

The tour found that while there were many different experiences of poverty, regional differences, societal norms, personal perspectives and other factors contributed to an individual’s explanation of poverty. Based on the accounts offered, and in subsequent discussions, it is evident that within the broad array of poverty experiences, there are social and economic threads common to most individuals and situations. The self-identified experiences include specific characteristics that are important elements to understanding poverty at its root cause. The personal testimony brought into focus the crux of poverty – a lack of sufficient income to meet basic needs.

Many individuals raised health issues as a predominate factor in their lack of funds to meet basic needs.

Rose suffered a heart attack that required surgery. She lived in Virginia Beach, where the surgery was performed and botched, leaving Rose with an irreparable disability. She is unsure of her life expectancy at this point.

Linda’s focus was on health care services and her struggles with declining health. Linda has lived in poverty her whole life and suffers from a plethora of medical issues. She uses a variety of federal, state and local programs including Supplemental Security, SSDI, Medicaid and SNAP to deal with poverty issues and health-related concerns.

Job instability and lack of education, training and skill development were contributing factors to poverty, as well. Transportation accessibility was also a strong component. Most individuals found that education provided a path to escape poverty. 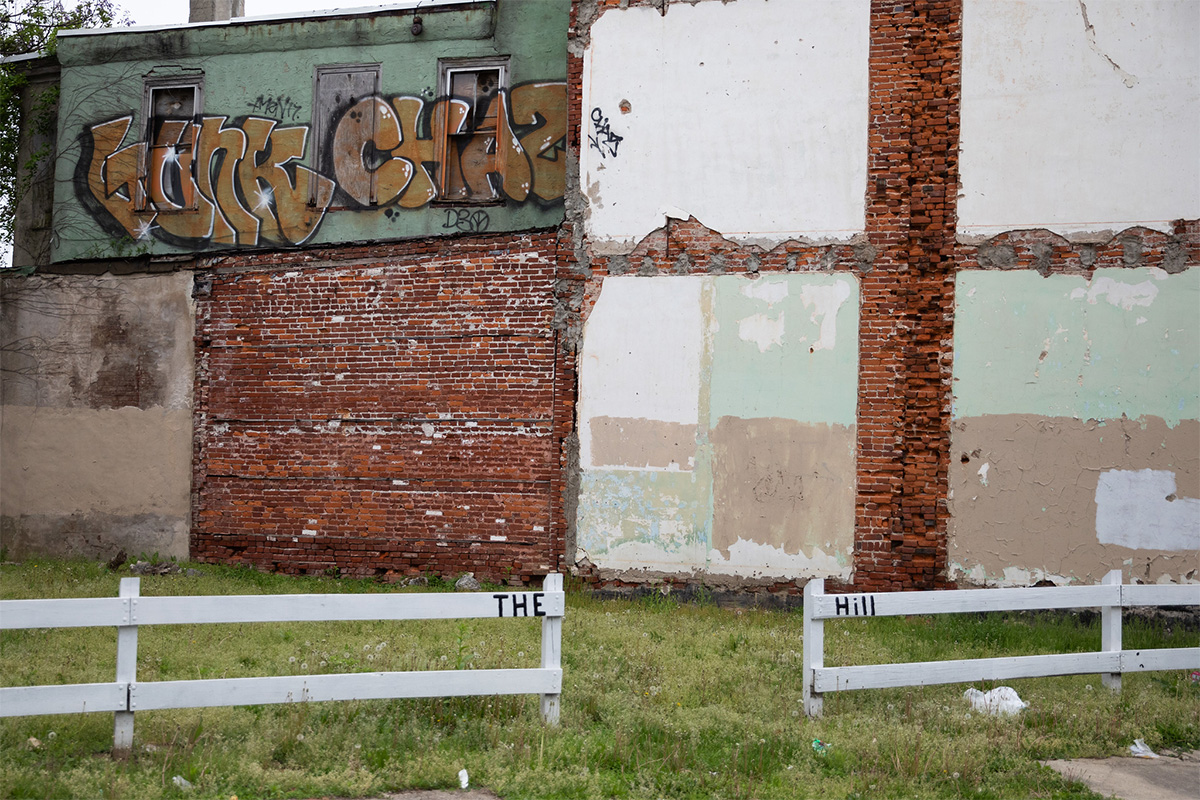 For others, logistical issues presented immense obstacles to gaining traction toward self-sufficiency.

Within the common, nearly universal self-described experiences of poverty, there were distinct and subtle differences that made each situation unique. It was evident that poverty was managed systemically by individuals.

Some had resources available, alternatives and means to navigate within the system, while others were nearly destitute with almost no resources in-hand. These individuals were almost totally dependent on government, social service networks, family relationships or unconventional means for survival.

Regardless of circumstances, the men and women were resourceful in dealing with tough economic circumstances. While facing extreme hardship and challenges, they were able to identify and pursue alternatives, finding ways to persevere.

The vast majority of those conveying their definition of poverty were able to detail their poverty management plan. They used government assistance programs and networks developed through contacts with faith based groups, community non-profits or within the population. Many outlined processes and procedures they used to address individual problems.

Michelle now has strong support networks to help her, and she relies on friends and her church to navigate poverty issues.

Kenar dropped out of school and got his GED through CareerLink. He enrolled in the Youth Enrichment for Success (YES) program at STEP. He says this program helped him because the staff at STEP really cared and motivated him to succeed.

Testimony from those who fall within the broad range of poverty – from destitute to low income – illustrated how men and women dealt with challenges. From those totally without means (income, housing, transportation, etc.) to others who live on the fringes of economic independence, policy making lessons can be learned from understanding the obstacles faced within the broader definition.

Rochelle said reform efforts need to recognize that poverty is not about people not working or not wanting to work, but rather about people working hard and not earning enough money. 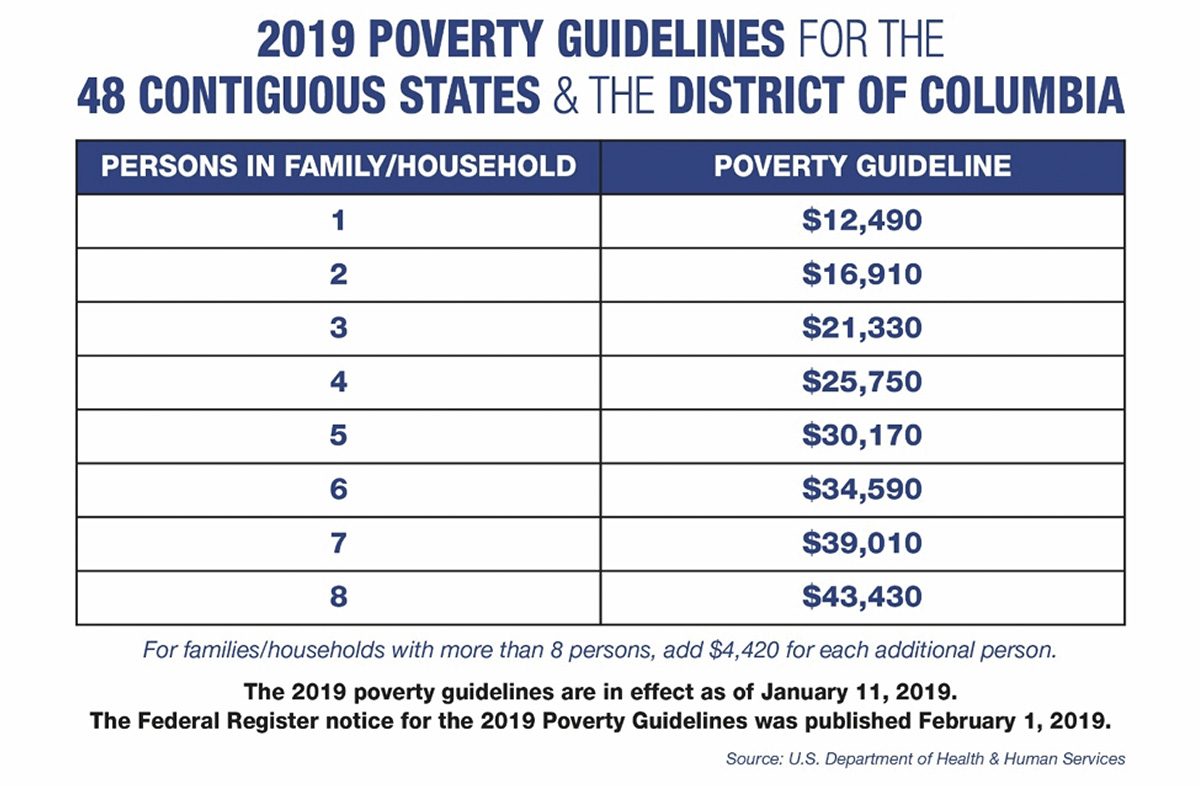 At the time of the Federal Labor Standards Act’s (FSLA) passage, the country did not yet have a poverty wage measurement to quantify at what income level a family would not be able to meet their basic needs. The Federal Poverty Level (FPL) was established under President Lyndon B. Johnson’s administration in 1963 by Mollie Orchansky, an economist with the Social Security Administration (Fisher, 1992). The FPL was created based on the static calculation of low- and economy-cost food prices under the U.S. Department of Agriculture’s 1955 Household Food Consumption Survey food plan, multiplied by three (3) (Fisher, 1992). The FLP has been increased according to the Consumer Price Index since 1969; however, the base year calculation has not changed since 1963, nor has any measure for determining costs other than food been added to the calculation (Fisher, 1992).

There are many academic and government reports that detail the gradations of poverty. Poverty estimates are tied to assigned levels, typically referring to those families with incomes below 100 percent of the federal government’s poverty threshold (Chaudry, et al., 2016). Another measure of economic stress that further defines poverty is referred to as “deep poverty” (Chaudry, et al., 2016).

Using data compiled over an extended period, HHS has generated helpful charts to illustrate how the population experiencing deep poverty has grown over the years (Chaudry, et al., 2016). 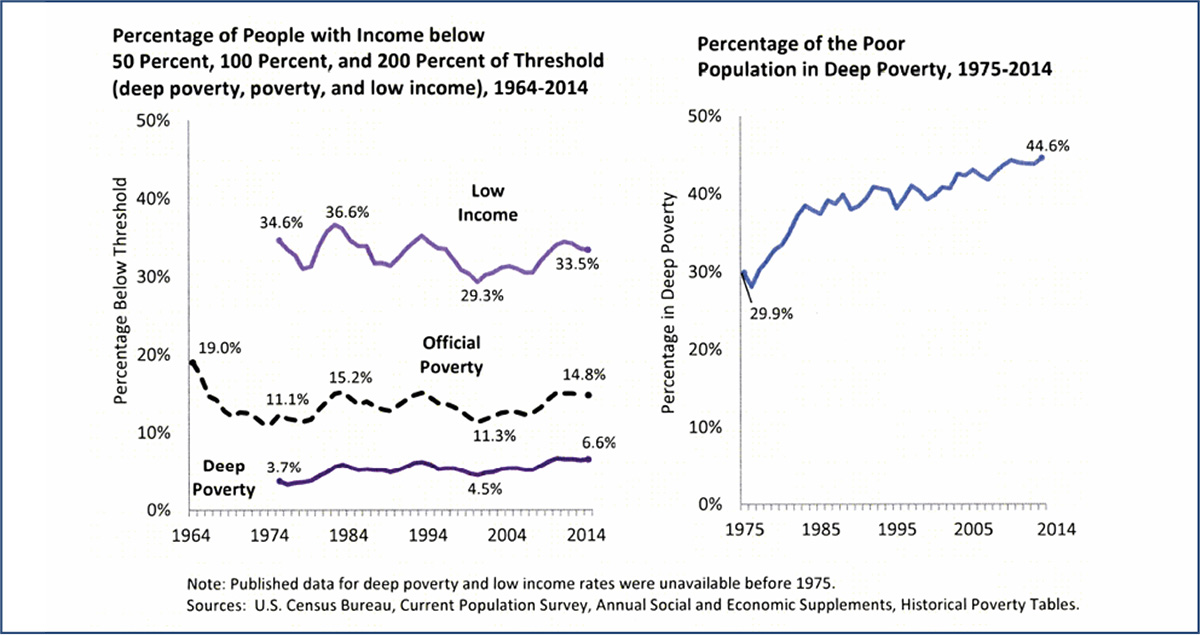 Testimony offered during the Poverty Listening Tour clearly demonstrated the dimensions of the threshold.

Danielle presented a thorough outline of her effort to escape poverty. She is a single mother of three children and a military veteran who faced discrimination while looking for both housing and jobs. In addition to problems with housing, employment and school issues, she was also a victim of domestic violence.

“How much money constitutes a living wage?” is a question that has been widely debated. Workers, employers, and policymakers continue grappling to find the answer to that question. In order to understand what a living wage looks like, we must first examine our historical and current system of labor practices, including the minimum wage.

The federal minimum wage was first enacted in 1938 under the FLSA. The FLSA was intended to rectify detrimental labor conditions affecting the “minimum standard of living necessary for health, efficiency and general well-being” (Fair Labor Standards Act of 1938). This included creating fair worker’s wages and labor standards, such as workplace safety laws and a ban on the use of child labor. In presenting his case to Congress, President Franklin Delano Roosevelt said the country should give, “all our able-bodied working men and women a fair day’s pay for a fair day’s work” (Grossman, 1978), or a living wage.

Many advocacy groups and research groups have been not only influencing policymakers, but working to unravel the riddle of what a living wage should look like in the U.S. Many states have increased their minimum wages in an effort to address this issue and keep up with the wage’s original intent. Research shows that increases to the minimum wage are essential to pulling people up and out of poverty. But the standards by which we determine an accurate reflection of actual costs of living in a given location need to be improved as well, as the FPL does not provide an accurate picture.

When workers are forced to earn poverty wages in the form of our current $7.25 per hour minimum wage, we cannot expect them to pull themselves out of poverty conditions. No one earning a “living wage” should need to wonder how they are going to pay for their next meal, afford rent for the month, pay for child care for their dependents or their doctors bills. An increase of Pennsylvania’s minimum wage is necessary to provide our working poor with a path toward self-sufficiency.