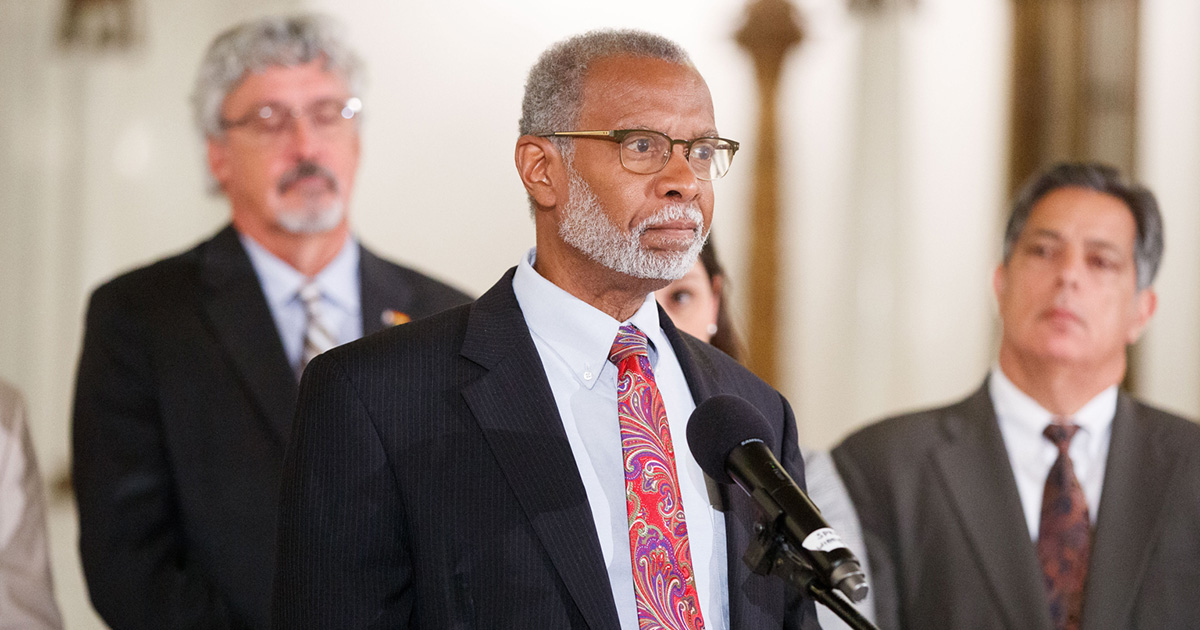 Harrisburg, Pa. – October 12, 2022 – Today, State Sen. Art Haywood (D-Montgomery/Philadelphia) joined Free Speech For People President John Bonifaz to announce legislation that requires the secretary of the Commonwealth to disqualify any candidate who has taken an oath to support the Constitution, then engaged in insurrection against the United States, from ballots in Pennsylvania.

Sen. Haywood introduced Senate Resolution 357 in the 2021-2022 session to all Senate members. Sen. John Kane (D–Delaware/Chester) signed on to cosponsor the legislation. During a virtual press conference, Sen. Haywood provided specifics of the legislation, which excludes candidates from Pennsylvania ballots who demonstrate disloyalty to the U.S.

The concurrent resolution proposes the following:

“Section 3 of the 14th Amendment to the U.S. Constitution makes clear that anyone who has taken an oath to uphold the Constitution and then engages in insurrection is forever disqualified from holding public office again,” said John Bonifaz, the president of Free Speech For People. “We applaud Senator Haywood for introducing this critical resolution to ensure that the Pennsylvania Secretary of the Commonwealth follows the mandate of this constitutional provision and bars from any future ballot all elected-officials-turned-insurrectionists, including Donald Trump.”

To qualify for as an elected official in Pennsylvania, candidates must demonstrate that they meet the qualifications to hold public office, such as age, citizenship, and residency and uphold requirements of both the Pennsylvania and U.S. Constitutions. This legislation would apply to all levels of government, including county officers, judges, members of the General Assembly, members of Congress, attorney general, lieutenant governor, and governor. By virtue of Section 3 of the Fourteenth Amendment to the U.S. Constitution, the resolution would also include the Pennsylvania presidential ballot.

“No one is above the law,” said Sen. Haywood. “Elected officials in the U.S. take an oath of office to support the Constitution and be servants of the people. He continued: “No person who engaged in the Jan. 6 attack at the U.S. Capitol, or supports insurrectionists, should be allowed to hold public office.”

In September, District Court Judge Francis Mathew in New Mexico ruled that Couy Griffin, an Otero County commissioner, was disqualified from holding public office for violating Section 3 of the Fourteenth Amendment and participating in the Jan. 6 insurrection.

To complement the legal remedy witnessed in New Mexico, Sen. Haywood proposed this legislation help protect the integrity of elections, restore faith in the electoral systems in Pennsylvania, and protect democracy. He defines this legislation as a critical step to saving the nation and encourages the General Assembly to support it.

The president pro tempore of the Pennsylvania Senate will assign Senate Resolution 357 to the appropriate committee. Video of the event will be available at senatorhaywood.com/video.