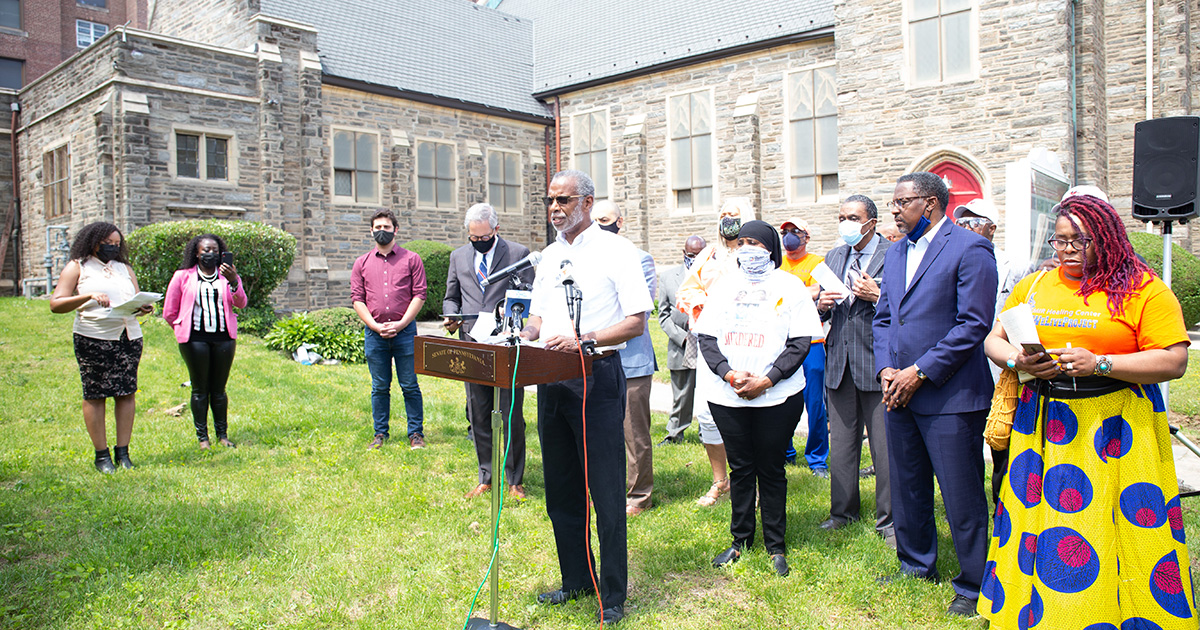 PHILADELPHIA – May 14, 2021 – Today, State Senator Art Haywood (D-Montgomery/Philadelphia) hosted a gun violence press conference, in partnership with the Black Clergy of Philadelphia, to call for the General Assembly to pass legislation to reduce statewide gun violence. The event was held outside of Janes Memorial United Methodist Church in the Germantown section of Northwest Philadelphia.

This week, Sen. Haywood introduced SB670, a bill which will create a grant program,  Violence Intervention Program (VIP), through the PA Commission on Crime and Delinquency. The VIP grants will be used to support community-based initiatives with demonstrated success at reducing gun-related violence in municipalities disproportionately impacted by violence, including Philadelphia. Co-sponsors of the bill include Sen. Anthony H. Williams (D-Philadelphia/Delaware), Sen. Christine M. Tartaglione (D-Philadelphia), and Sen. Sharif Street (D-Philadelphia).

On Friday afternoon, Sen. Haywood welcomed legislators, members of the clergy, community leaders, and gun violence prevention advocates. Rev. Robert Collier, Sr., President of the Black Clergy of Philadelphia kicked off the lineup of speakers by declaring that this bill is a positive move in the right direction and his organization strongly supports it. Rev. Collier introduced Rev. Gregory Holston, Senior Pastor of Janes Memorial United Methodist Church, who stressed the importance of fully funding this gun violence prevention effort.

“What people harmed by violence most want in this world is for that harm to have never happened,” said District Attorney Larry Krasner. “Deep, sustained investments in community-based violence prevention services and programs will lift up vulnerable communities and help prevent future victimizations. Prosecutors work diligently to secure accountability for violent acts in our arena, which is the courtroom, but true justice means no one is ever harmed by violence in the first place. I’m honored to stand with leaders who are fighting for the bold investments in violence prevention all of our communities deserve.”

“Communities that are most impacted by gun violence know best what resources they need to heal, to problem solve, and to prevent violence from occurring in the first place,” said Sen. Saval. “It is our job, as legislators, to listen to them and support them in every way that we can. I’m proud to add my name as a co-sponsor of legislation that invests in communities and empowers and enables them to cultivate the solutions they need.”

“Philadelphia CeaseFire’s success in reducing shootings by 30 percent was built on changing not only the behavior of our clients, but also working closely with our target community,” said Marla Davis Bellamy, Director of Philadelphia CeaseFire. “With additional funding, we can duplicate that success, however, reducing violence must become our city’s top priority, and everyone who lives, works and plays in Philadelphia must have skin in the game.”

As of May 11, 2021, the bill has been introduced and referred by the PA Senate Judiciary Committee. This legislation will provide $30 million in grants across the Commonwealth for a duration of three years. VIP Grants will provide violence intervention services to grantee’s communities at the highest risk of perpetrating or being victimized by violence.

“Our elected officials in Harrisburg must act to protect our communities from the epidemic of gun violence,” said Max Milkman, Lead Organizer for CeaseFire PA. “State lawmakers have a responsibility to invest in the safety of Pennsylvanian communities.”

Invited elected officials across the state also endorse this legislation. “I am happy to support Senator Haywood’s gun violence bill, which if approved by the full General Assembly, could provide over $3 million in grants yearly to gun violence intervention organizations throughout  Philadelphia,” said Philadelphia City Councilmember Kenyatta Johnson (D-Philadelphia), who serves as Chairman of Council’s Special Committee on Gun Violence Prevention. “Senator Haywood’s three-year plan for an estimated $30 Million in grants statewide is exactly what the city needs to overcome the increasing rates of gun violence. This funding is a major step forward and I urge members of the Pennsylvania Senate and House to pass this bill immediately.”

Sen. Haywood chose to focus on this bill ahead of National Gun Violence Awareness Day, which is observed nationally on June 4, 2021. Video of the event will be available at senatorhaywood.com/video.