The Pay Report: Fighting to Raise the Minimum Wage in PA 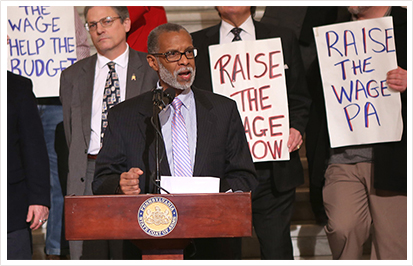 “Pennsylvania workers continue to be left behind as this state continues to have a minimum wage that keeps workers below the poverty line,” Sen. Art Haywood said. “The time to increase the wage is now!”

Sen. Haywood, Sen. Christine M. Tartaglione and Rep. Patty Kim have teamed up to push proposals to immediately raise the wage. The bills, Senate Bill 1044 and Senate Bill 1045, would raise minimum wage to $12 an hour with a goal of raising to $15 by 2024, increase pay for tipped workers to $9 an hour, and make it possible for local governments to set a minimum wage that matches their local costs of living. 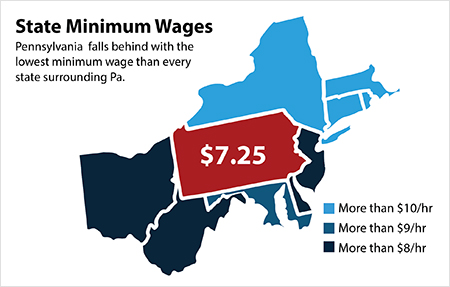 Pennsylvania has not raised its minimum wage since 2006 and is one of 21 states with a minimum wage of $7.25 an hour. If you are currently employed full-time at a minimum wage job working 40 hours a week, your yearly income is $15,080. An income that low puts a family of two below the poverty line. As more states begin to raise the minimum wage closer to a pay scale that will lift workers out of poverty, Pennsylvania risks falling behind economically by continuing with the stagnant wage of $7.25.

If Pennsylvania enacted the SB 1044 plan to raise the minimum wage to $15 by 2024, the Keystone Research Center predicts that 2.2 million, or 37 percent of the workforce would be positively impacted.

Last Place in the Region

All of Pennsylvania’s neighboring states have implemented policies to begin paying workers a sustainable and livable wage.

The struggle of low pay is not limited to those working for minimum wage. Middle class families and middle-skilled workers are feeling the brunt of low wages too. The U.S. Department of Labor reported that the average earnings of private sector employees in Pennsylvania increased 34 cents from December 2016 to December 2017. In the same year, private sector employees in Maryland received an average increase of $1.98, New Jersey employees saw an average increase of $1.17, and West Virginia employees’ average earnings increased $1.26.

Help Pennsylvania Get Back on Track

If lawmakers continue to allow ridiculously low wages to be paid, the gap between Pennsylvania workers and their interstate counterparts will continue to grow, leaving Pennsylvania’s workers, families, and economy behind. Implementing a steady annual pay increase to account for the yearly increase in living expenses is proven to begin pulling low-wage workers out of poverty and ensure that mid-skilled workers can sustain their livelihood year to year. 1.7 million workers would benefit from an immediate minimum wage raise. This number would reach 2.2 million by 2024.

The implementation of a gradual pay increase over a consistent number of years has been working in Maryland, Ohio, New York, and New Jersey. It is long overdue that Pennsylvania joins its neighbors in helping the lowest paid citizens receive a wage that will bring them out of poverty and give them the chance to be financially stable.